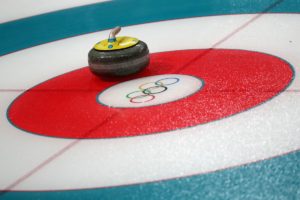 Click to hear Ulcer at Work by Kevin Shinn ©2005

Over the last two weeks, how many of us became riveted to watching sports activities with which we were not familiar or possibly never even heard of?  Who knew women’s biathlon would become so interesting that it would keep Karen and me awake an extra hour because we wanted to see who won. And how did curling become so intriguing that three guys in the tap room ordered an extra beer and moved to a table with a better view of the television so they could keep watching a sport they will never encounter for another four years?

I think some of the interest stems from how well these sports are covered and produced for viewing.  High definitions cameras capture the intensity of the face of competition.  In-depth telling of the stories of the athletes draw us in to the effort it takes to compete at such a high level.

But of personal interest, I love learning what drives a person to succeed, especially in an activity that I could never imagine myself participating in. What does it take to strap on a pair of skis, shoulder a rifle, and set out across snow country every day, day after day, with the hope of someday being the very best among the rest of the world? I watch for that story.

I set out years ago to achieve a dream, but that dream finally came to an end last year.  And now I have to ask are the best days behind me?  Did I have my chance or is the slate clean again, ready for a new picture to be sketched into reality.

If you’ve had to start over, I’d enjoy knowing how you did it and how you found the motivation.