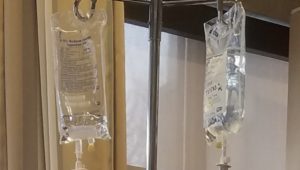 What I feared has come upon me; what I dreaded has happened to me.  Job 3:25

A good friend gave me the book, Band of Brothers, several years ago as a marker of our friendship and to commemorate some of the hard times we had gone through together. But I only made it through the first two chapters before I had to put it down. I was overcome by a sense of guilt as I was given a glimpse of life as a soldier in a war that I could never imagine fighting. I became morbidly reflective. What would I have done if I were in Nixon or Blythe’s shoes? Would I have held up under such circumstances? Would I have caved in, or abandoned my post out of fear? Most of my assumptions were negative, keeping me at a distance from these important and heroic stories.

That guilt ended last year when I finally gave myself permission to watch the HBO film series of the book, thanks to my Amazon Prime subscription. The impetus that helped me over my guilt was another friend’s counsel. He told me, “Don’t make their story your own.” He pointed out to me it was unfair to make that kind of comparison. One, it prevented me from entering into their stories with honor by making it all about me, and two, it presupposes the worst about my possibilities if ever faced with such difficulty.

I realize that some people have a similar reaction when I discuss how I’m dealing with Karen’s cancer. In a recent conversation, I heard these two remarks. “I don’t have the same kind of faith as you.” and “I could never be as strong as her.” I think this kind of assessment must be human nature. It’s easy to adopt a lesser mindset when observing others dealing with any kind of pain and suffering, especially if I’ve never experienced the same thing. Let me offer this bit of encouragement.

Cancer is something I would never wish on anyone, even my worst enemies. It is destructive on its own, let alone the impact of some of the side effects of its treatment. It can rob you of a quality of life and ultimately can take away the one you love. I hope you will never face it in your lifetime.

But if you do, I believe there is a special grace available to you, and the crisis makes it more accessible to you now that you have a new battle to face. Its a grace you didn’t need before. But it’s a grace that can overshadow your new enemy, whatever form it might take.

So I speak with confidence; do not be afraid that someone else’s realty would become your own. It’s not worth the energy. If the thing you fear never occurs, then you’ve not wasted time dreading a scenario that only found space in your mind. If it comes, then receive that grace that will strengthen you beyond what you thought you were capable of.  In the meantime, enjoy your special moments today without fear. They will mean more to you as future memories and you’ll find you can savor them more fully.

Cancer is the hand we have been dealt. Karen and I are going to play that hand to the best of our ability. And we have every intention of winning.